In December 2017 Paul Bew concocted and published a report under instruction from the government with the intent of preparing the groundwork for an extreme attack on democracy.  Presented as response to “intimidation of MPs” one of the suggestions in the Bew Report was that people who opposed the government could be barred from voting in elections in Britain.

“Electoral law can overlap with and complement the criminal law, such that offences with criminal sanctions can also involve sanctions under electoral law. These sanctions are specific to the election process, such as being barred from voting for a certain period, or removal from the electoral register.” (p 60, section: Electoral Law)

On the following page Bew said

“The government should consult on the introduction of a new offence in electoral
law of intimidating Parliamentary candidates and party campaigners.” (p 61, box)

That “consultation” has just begun.

Tory Minister for the Constitution Chloe Smith, MP for Norwich North, quoted in a BBC report, said “intimidation was putting talented people off standing for election,” and “the measures being consulted on would protect voters, candidates and campaigners so they can make their choice at the ballot box or stand for public service without fear of being victims of misinformation or abuse.”

The BBC report also claimed that a Cabinet Office spokeswoman said the length of the ban on convicted “abusers” standing for or holding public office would be a part of the consultation.

To clarify, the Tory proposals are:

That was always the intent of the Bew Report and of preceding debates in parliament on “intimidation of MPs.”

A consequence of the introduction of laws to enact the above proposals would be a significant fall in the volume and the intensity of criticism of Tory acts, statements and policies.  Of course, that diminution of criticism and inspection is precisely what the Tories are aiming for.  Threats of being barred from voting or from standing for office is sufficient to attain the reduction in accountability that the Tories want and need.

This is not the first time that the Tories have sought to greatly reduce inspection of their behaviour, particularly during election campaigns.  They created the infamous gagging law to stop charities revealing the savage effects of Tory policy.

It is also not the first time that the Tories have sought to restrict voting.  They intend to expand voter suppression trialled in this year’s council elections.

After publication the Bew Report did not get much attention.  Understandably, a long-winded repetitive government report is not an appealing read.  But, the proposed attacks on democracy and on the ability to examine, criticise and hold to account the government are deeply disturbing and need to be understood in their intent and their consequences. 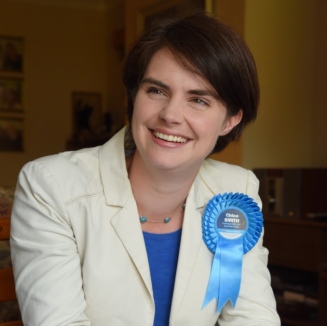 Chloe Smith has form.  Earlier this year she pressed criminal charges against a disabled constituent who had criticised the government’s persistent attacks on people with disabilities.

Her contempt for democracy was demonstrated via her misuse of a parliamentary credit card that was suspended fourteen times in three years for.