Last week (August 2018), Steve Bannon, former Breitbart chairman, former Trump advisor and present racist white supremacist, had a nice cosy chat with Murdoch gimp Michael Gove and old Etonians Jacob Rees-Mogg and Boris Johnson.  It was a meeting to share stupidity, bigotry and venality.  Bannon wanted some help to create a series of extremist fascist states in Europe and the three Tory twerps wanted to get some advice on what tactics and strategy they can get away with.

Looming Brexit encouraged Bannon and his Tory friends to get together now.  The latter three intend to do all they can to ensure that disaster capitalists make hay out of Brexit; equally, Bannon believes that Brexit’s calamitous consequences will be fruitful opportunities to rabble-rouse, organise and instill fascism on a grand scale.

The extreme-right is generally composed of two almost distinct groups: 1) Lumpen-headed foot soldiers with unbending, unchallengeable belief in the veracity of their views, and 2) financial beneficiaries and their servants (politicians) who direct the first group via misrepresentation and propaganda, and then reap the awards.  For example, an EDL street thug and an old Etonian, respectively.

Steve Bannon, as an extreme-right activist, is both a believer in the politics of racism and fascism and also an influential leader and organiser with connections throughout governments, media, business and think-tanks.  He straddles both of the above groups.  Unlike Donald Trump, who is in it for the money for himself and his family, Bannon really believes what he thinks, says and promotes.  Unlike street thug Tommy Robinson, Bannon has the influence to persuade people in power.

It is unsurprising that Rees-Mogg, Gove and Johnson were keen to meet Bannon.  Their view of him is of someone who has succeeded in a support role to a politician.  For this trio, Bannon’s use of racism, fascism and extreme dishonesty is not problematic, just tactical.  The Eton machine taught Rees-Mogg and Johnson how to treat the world as a competition bereft of ethics, morality and integrity.  Johnson’s racism has never been hidden by him.  Rees-Mogg has been delighted to acquire a fanbase of dim-witted racist thugs.

Soon after meeting Bannon, Boris Johnson wrote a newspaper article wherein he made a few childish comments about Muslim women’s clothing, written in the style of Katie Hopkins.  Most likely, these racist asides by Johnson were suggested by Bannon as a means of testing what could and what couldn’t be said and what would be the reaction and from whom.  Johnson, a moron, would have been confident to follow Bannon’s instructions without ado; Bannon is someone who Johnson reveres as an intellectual.  Of course, Johnson didn’t need encouragement to be racist.

The reaction to Johnson’s racism has been mixed.  The right-wing media have used it as an opportunity to have debates about whether or not his racism is racism.  The centrist media and politicians have managed to force out a few words of criticism before returning swiftly to whatever point they are trying to make about Jeremy Corbyn and anti-Semitism.  The media have been reluctant to use the word “racist” to describe what Johnson said, and have pitched their articles as people complaining about Johnson rather than his wrongdoing being the focus.  Socialists have condemned Johnson.  Prime minister Theresa May has, predictably, said absolutely nothing.

Thus, Bannon’s experiment with Johnson’s utterances could be construed as a success for both of them.  The condemnation of Johnson’s racism has come only from the left, a section of the political landscape that Bannon has no interest in, and the media have used the racism as an entry point into a general discussion that questions whether racism is racism.

Steve Bannon cannot be dismissed as an opportunist, like Trump, nor as a barely human yob, like Robinson.  Bannon occupies all parts of the extreme right circus with considerable manipulative skills and a strong knowledge of propaganda. 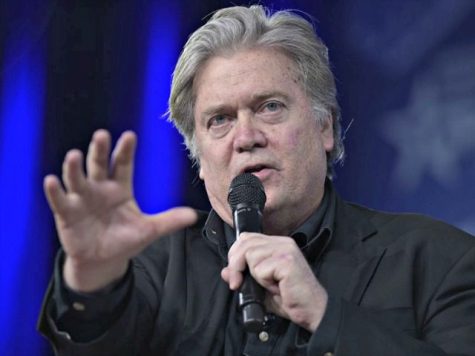