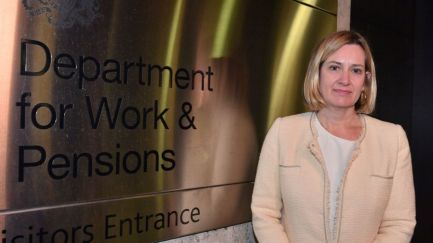 After a few months had passed, Rudd was handed a new ministerial salary in government.  The gap between her ministerial jobs was less than the length of some sanctions applied to people who claim welfare benefits.

As soon as she began her new role Rudd made clear her intent to continue with Universal Credit, a key component of the Tories’ Social Murder policy.

Rudd’s first comments in parliament about Universal Credit included a libellous dismissal of a UN Report into poverty in Britain.  A cursory dismissal of the report’s conclusions coupled with standard Crosbyite accusations – describing the report as “”extraordinarily political” – showed that Rudd’s intent was to continue with the devastation regardless of criticism and to treat such criticism with contempt.

Her callousness and deliberate ignorance were displayed in an interview on BBC Radio 4’s Today show – quotes from iNews report – where she described Universal Credit as a “tremendous force for good in this country” and “revolutionary” and said that the destitution, homelessness, exacerbation of illnesses (including terminal illnesses) and death were “teething problems.”

Becky Polain from Hastings Advice and Representation Centre explained the truth about the effects of Universal Credit in Rudd’s Hastings constituency – quotes from Hastings Observer report:

“I have witnessed the systematic destruction of a support system, designed to help those that need it most, to create a widespread situation of poverty, ill-health and despair.  This may sound overly dramatic, but it is exactly what has been happening, especially since the introduction of ‘austerity’ and the disastrous ‘welfare reforms’.  Arguably, the hardest hit have been those with illness and disabilities.  Over 95 per cent of the cases we take on are won at tribunal with an increased rate of benefit.  We are finding that the health care professionals who carry out these assessments are completing reports that are regularly inaccurate.  Despite most appeals being successful, a claimant may have to wait over a year from the initial decision to their case being heard at a tribunal.”

“They suffer financially, having to make decisions between rent, food and bills with what little they have, often falling into debt or becoming homeless.  This puts greater strain on already overburdened services that have all seen cuts in their budgets, in all sectors. Some people will resort to crime, or turn to self-medication with legal and illegal drugs.  The impact is felt by the NHS, police, local authorities and social services, to name but a few.  The cut in funding to the voluntary sector means that fewer people can be assisted through advice centres, homeless charities and food banks.  The demand ever increases for the services constantly receive less in funding. It is no coincidence that the demand at the Hastings Food Bank has increased by 87 per cent over the last few years.“

“Public awareness is rising with regards to issues such as this, but more people need to get involved.  Many articles detailing specific experiences of claimants tug at the heartstrings of those already with a social conscience, but will have no effect on those that simply do not care, that have no empathy, and view people claiming benefits as ‘scroungers’. Those are the people we need to target.  If they are made aware of how much of the tax they pay is being spent on repeated unnecessary assessments, the appeals process, the emergency services, the NHS, etc. maybe they would feel as passionate about this problem as we are.  If you are concerned about these assessments and the impact they are having on all our lives, please write to your MP, and the Secretary of State for the Department for Work and Pensions, Amber Rudd. She need to hear your experiences. It is time for change.”

But, Rudd said “I have seen Universal Credit do some fantastic things.  In my constituency in Hastings and Rye, it really has transformed lives” – quotes from Evening Standard report.

Rudd’s wilful blindness to the effects of sadistic welfare cuts in her own constituency revealed that her approach to the job as DWP Minister will be as dishonest, as criminal and as vicious as her recent predecessors McVey, Gauke and Duncan-Smith.

(Rudd won her seat at the last general election with a slim majority of 346.)

Rudd’s business career, bankruptcies and tax-dodging
Bankruptcy can affect many people, personally and to their businesses.  It is a device to protect investors and creditors and to avoid destitution for the bankrupt.

However, the structure of the process of bankruptcy can be abused by professional bankrupts who use it as a means of avoiding business debts (including tax demands) after the business’ assets have been stripped by the person or persons who are declaring bankruptcy.

Ken Long provided a précis of Rudd’s interesting business history for A Fairer Society.  The recurring theme throughout her business career was directorship of a company that acquired millions in investments and soon after collapsed owing millions, and then Rudd left to repeat the process somewhere else.

The leak of the Panama Papers listed thousands of public figures’ dodgy financial management techniques and tax avoidance; Amber Rudd appeared there as a director of Advanced Asset Allocation Fund and of Advanced Asset Allocation Management, both based in Bahamas.  Rudd elucidated her attitude to tax-dodging earlier this year when asked about David Cameron’s father’s thirty years of dodging tax via offshore accounts in tax havens: “I think the key thing is here that the prime minister and his family paid the correct amount of tax that they were due.”

A Guardian report on the Panama leaks included more facts about Rudd’s businesses.

“Records at Companies House also identify her as a director of Monticello plc, which became the centre of an investigation into share ramping after one of her co-directors, Mark O’Hanlon, gave an interview in January 2000 in which he made false claims about the company’s prospects.  Monticello’s share price subsequently skyrocketed and trading on its shares was suspended.  Rudd resigned as a board member five months later, two days before she also resigned as director of Advanced Asset Allocation Management.  The episode led the Department of Trade and Industry to investigate, and in 2007 O’Hanlon was convicted of making a false statement and sentenced to 18 months’ imprisonment.  He was jailed again in June 2013 following an unrelated fraud conviction.”

It isn’t clear from the above information how much Amber Rudd profited from the rise in Monticello’s shares that occurred due to misinformation from her co-director.

Shameless tax avoidance and the tactic of bankruptcy defined Rudd’s business career and defined her as a person.

Rudderless
Amber Rudd is a typical Tory MP.  She has persistently manipulated the law to enrich herself at others’ expense while supporting despicable policies that have caused extreme hardship and death, first with Windrush and now at DWP.

There is nothing to note about her career that isn’t worthy of utter contempt.

One thought on “Amber Rudd: Tax-dodging, bankruptcy and Social Murder”