Seven Progress MPS added their names to a letter (screenshot at foot of blog) sent to Jeremy Corbyn yesterday in response to data published by Labour’s NEC that showed numerical details of accusations of antisemitism against Labour members and the results of ensuing action by the party.

The mendacious seven chose to publish their letter before waiting for any response to the queries contained within it.

There are several problems with the letter.

1) Impatience
Some of the points raised in the letter (see points 2 – 8 in the letter) are demands for more information and, thus, could easily have been resolved with a polite enquiry (to the NEC) rather than a complaint declared publicly before the recipient had seen the complaint.

2) Confusion between party leader and NEC
The inquiry and any disciplinary action regarding antisemitism is the responsibility of the NEC.  The Progress seven are aware of that fact but chose to target the party leader with their complaint.

3) Invention of parliamentary party procedure
The letter mentioned a Parliamentary Labour Party meeting on February 4th whereat they claimed a “unanimous” vote had decided that Jeremy Corbyn would provide an oral report on the NEC investigation into antisemitism in the party on February 11th (yesterday).  They referred to the vote as a “motion” that had been passed.  This is pure invention of procedure.

A random out of context single-sentence paragraph near the end of the letter exposed the seven as uninterested in facts, logic or the linear nature of time.

“The failure to respect the request for this simple information does nothing to dispel the accusation that is an institutionally antisemitic organisation.”

To clarify, an extreme accusation was made (above) because requests for further information had not yet been met, but these requests for more information were earlier in the letter.  Did the seven think that Jeremy Corbyn was able to respond to the first part of the letter before the letter had been finished, or sent?

Elsewhere, one of the signatories, Margaret Hodge, issued a statement wherein she expressed disappointment that there were not more proven incidents of antisemitism by Labour members.

“I [Hodge] put in over 200 examples, some vile, where evidence suggested they came from Labour.  So I don’t trust figures.  I can’t believe only 12 expulsions.  I am not convinced leadership serious on rooting out anti Semitism.”

Progress will never be satisfied
Progress MPs will never be satisfied with whatever action Labour takes regarding antisemitism.  When Jeremy Corbyn was elected as leader Progress decided that accusations of antisemitism would be applied constantly regardless of proof or reason.  This letter is yet another bizarre, contradictory and worthless addition to their campaign.

Progress is dedicated to preventing a Corbyn-led left-leaning government. 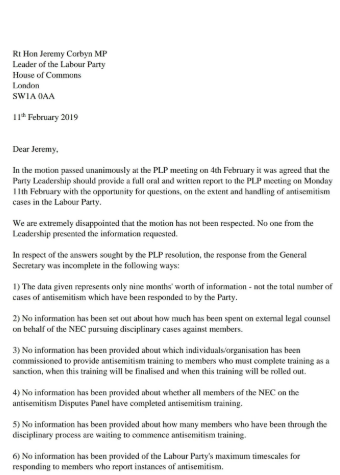 One thought on “Seven Progress MPs are disappointed by the lack of antisemitism in Labour.”