(Dame) Cressida Dick’s Metropolitan Police (Met) oppose the human right to political protest.  Nine and a half years of Tory rule eroded legal rights to protest, demonstrate or picket politically.  Tory appointments to the most senior positions in the Met ensured that it policed political action in the interests of the government.  Changes to law and changes to police procedure were designed to be vague to allow the police to act however they want.

Two modes of operation by police when dealing with protests are wilful misuse of the law.

1) Normally, over 90% of people arrested at political protests are not charged but issued with ridiculous bail conditions.  The arrests are intelligence gathering without consent – names, addresses and photos of arrestees – and the bail conditions focus on instructions to not attend any protests which is criminal manipulation of the reason for bail conditions.  Such actions are deliberate abuse of the bail system and of the powers of arrest and exist solely to deny the right to protest.

2) Section 14 of the Public Order Act is both a draconian anti-protest law and an excuse used by the police to do whatever the hell they like.  Police enactment of Section 14 is always outside of due legal process.  Typically, it is used in a staged way to reduce a protest size and effectiveness.  New impositions of Section 14 are declared without prior warning and at the most awkward time.  In the ongoing (October) Extinction Rebellion street protest in London the police imposed Section 14, erroneously, to restrict protest to Trafalgar Square and then turned up there late at night with another Section 14 scam to close the protest. 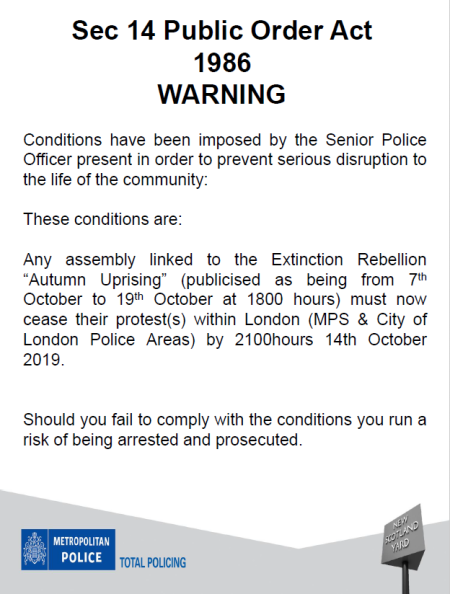 Both of the above police tactics are easily contested and overturned in court action but that happens after a protest was stifled by illegal police actions and it does not stop the police from repeating the tactics.  Police forces know they can break the law regarding policing of political protests with no consequences for them and no ensuing restriction on their actions.

The Met’s swift removal of the right to protest for Extinction Rebellion was not due primarily to opposition to the political message of demanding action to tackle man-made climate change.  The denial of protest was a response to how successful Extinction Rebellion has been in both numbers of people worldwide who take part and the connection made between climate change and the destructive capitalist system.  Extinction Rebellion targetted parliaments, fossil fuel industry and its financial backers, banks and media outlets that support climate destruction.  The protesters made a necessary connection between climate change and its culprits and that is what scares governments.

Almost all Extinction Rebellion protesters in Britain have not been violent but police used violence against them.  For political protests police violence is always displayed blatantly and targetted at the weakest.  The police want to be seen to be violent thugs as a means of deterring protest by frightening people from attending.  Any organised self-defence by the protesters would be sure to be met with riot police armed with a variety of weaponry and with their faces covered cowardly to avoid identification.  There is no limit to what Cressida Dick is capable of.  She was the commander responsible for the operation to execute Jean Charles de Menezes on a tube train in 2005 and was a key protagonist in the subsequent attempted cover-up.

Cressida Dick enjoys her damehood handed to her by the Tories as a thank you for her obedience.  She is an archetypal obedient servant of elitism and control.

The Met is intrinsically political and none of its recent actions were surprising.

One thought on “Metropolitan Police and Extinction Rebellion”