Boris Johnson, a coward, does not want to be interviewed by Andrew Neil for his early evening BBC show.  Neil, though not an expert political interviewer, is a keener questioner of politicians than most in his profession.

Johnson prefers the less challenging Andrew Marr who has a deserved reputation for sitting quietly enabling Tories to prattle on before he moves on, without riposte, to the next question.

Prior to the terror attack on London Bridge on Friday (29th November), in which two people died, BBC stated that if Johnson refused to be interviewed by Andrew Neil then the former’s pre-planned chat with Andrew Marr would be cancelled.  Following the attack the BBC agreed to the Marr chat with Johnson without any precondition of commitment to a Neil interview.

The BBC’s rapid capitulation to Johnson’s whims is disappointing but it is actually worse than it seems.  Not only is Johnson dodging what would be assumed to be a thorough examination by Neil and enjoying an relatively unchallenged opportunity to regurgitate soundbites and lies on the Marr show but, now, the Marr interview will be even less difficult than usual because Johnson will be allowed to adopt an uninterrupted faux Prime Ministerial persona when discussing the terrorist attack.

A statement from the BBC’s PR department (below) admitted the Marr chat had been restyled from an election campaign interview with a party leader to a Prime Minister’s interview. 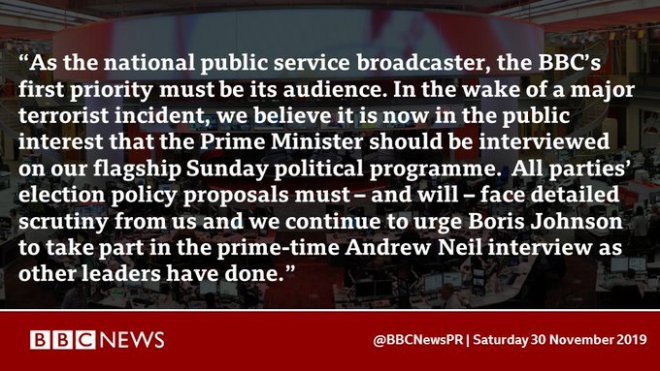 Clearly, if the BBC or any other broadcaster wanted to speak to the Prime Minister about the terror attack then they could do so – all broadcasters including BBC had such interviews on Friday and Saturday with Johnson and with members of his most recent cabinet including the Home Secretary.

The Marr interview did not need to be reactivated.  However, the crucial point is that its reactivation was described by the BBC as “in the public interest” meaning the BBC is pretending that it is not part of electioneering.  The final sentence in the BBC’s statement made clear that “detailed scrutiny” might be a feature of a Neil interview but it will not be part of today’s chat with Marr.

It is now a worse scenario re. Purdah than Johnson dodging scrutiny from Neil in favour of a nicer chat with Marr.  The restyling of the Marr chat by the BBC as Prime Minister’s response to a terror attack has handed Johnson an contested platform to do with as he wishes right in the middle of the election campaign.

Johnson knows what he has been given by complicit BBC and he will use it to try to help the Tories election campaign.

His predecessor was in a similar position in 2017: Theresa May’s used terror attack as shameless electioneering.