The response to the democratic election of Sepp Blatter as president of FIFA has been predictable.  Alongside haughty and hilariously hypocritical protestations from politicians, football “journalists” and even an unelected “prince”, unelected as both a prince and as president of the FA, an inglorious power battle has been declared by UEFA, led by Michel Platini, that seeks to usurp the elected authority of Blatter and the influence of FIFA on European football.

The clash of egos and the disunited passions of the football administrators are consequences of the process of acquiring such power wherein the attitude and persona needed to clamber to the top of football administration is swamped by megalomania, narcissism and blinkeredness.  The motivation for Platini and his gang is not integrity, professionalism or morality; the motivation is merely akin to a young child being unhappy that another child has a larger piece of pie.

Greg Dyke, the unelected chairman of the FA, has, unsurprisingly, been very keen to give his opinion to all his mates in the media.  Dyke is never short of a view.  Substance, coherence, logic, reason and usefulness are alien abstracts for Mr. Dyke.  What matters for him is that he says something and that the media report it.  “Look at me, I’m important!” is his mantra.  Dyke has noted that Blatter won an election, despite all the arrests and allegations a couple of days beforehand.  Thus, Dyke wants to fix the democratic process so that it suits his outlook; in other words, he wants to bring back the power to Western Europe.  In an interview reported by the BBC, (see Dyke), he says:

“It is a very strange system, a democracy where everyone gets one vote looks completely fair but then you say hang on a minute, Turks & Caicos Islands get the same vote as England, Germany or America, that doesn’t make any sense at all. At some stage, that might have to be changed.  What Mr Blatter has done is gone around the world encouraging any small country he can find to join Fifa and that is a vote for him.  The money is spread fairly evenly and for a lot of smaller countries that means almost their total income comes from Fifa, and they thank Mr Blatter for that.”

So Greg Dyke disapproves of one country, one vote.  Does he disapprove of the same scenario at the UN?  Those poor European countries unable to exert their power over the rest of the world.  And, evil FIFA pumping money into countries that don’t have the financial resources of the rich European nations.  But, Dyke thinks it must change.  He has be-suited himself with armour, picked up his broadsword and shield, bedecked with St. George’s cross, and he’s off on a crusade.

Dyke has his prince beside him.  The president of the FA, a post for which there is no election, prince William, is upset that one of his kind, prince Ali bin al-Husein, failed to defeat Blatter.  The doubly-unelected, doubly-appointed prince and FA president bemoaned the lack of a sense of fair play at FIFA, (see Prince William FIFA); those darned elections.

The utterances from Greg Dyke immediately prior to and since Blatter’s re-election are unintelligent, reactionary, unhelpful and wrecklessly inflammatory.  He is a clown.  Nothing he has said assists in reducing corruption at FIFA; indeed, his patronising comments have helped to solidify support for Blatter.  His support for England boycotting the world cup expresses Dyke’s contempt for England football fans and players.

Dyke needs to shut it! 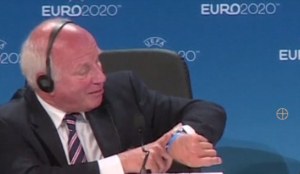 Greg Dyke, the leader of the new crusade

Tomorrow there is an election to appoint a new president of FIFA.  There are two candidates, current president Sepp Blatter and “prince” Ali bin Hussein.  Two days before the election Swiss police arrested some FIFA executives following investigations by US police into allegations of bribery and corruption related to FIFA activities.

Why is the legal action being taken now?

The marvellously-named Chuck Blazer, a former FIFA executive and a US citizen, who looks like an alcoholic, obese Santa Claus, has “assisted” the FBI to acquire evidence against his former FIFA colleagues, including gathering evidence while still an executive.  Blazer’s motivation is, clearly, not a product of a moral desire to do the right thing; he has not been overwhelmed by a (united) passion to put integrity first.  Blazer merely has some scores to settle.  His bruised ego needs a massage.

The FBI are very willing to play along because a criminal case of such magnitude as this would be will generate huge income for the US legal system.

Look at me, I have an opinion

The reaction to the arrests and to the statement from the US attorney general Loretta Lynch, (Lynch statement), wherein she made a series of allegations presented as if they are facts, has been woefully predictable.  Former footballer and current UEFA president Michel Platini asked Sepp Blatter to resign, seemingly forgetting that there is an election tomorrow, Tory MP and minister for culture John Whittingdale resurrected Joseph McCarthy and urged sponsors to withdraw their money from FIFA, and FA chairman Greg Dyke stated that he thinks the arrests will assist Ali bin Hussein’s chance of winning the election, despite Blatter’s continuing support throughout most of the world.

The British sports media have indulged in a circle jerk of frenzied supercilious pomposity, every ex-player who can persuade a broadcaster to offer him a fee for a bet on the horses has garbled out some incoherent drivel and Labour’s spokesperson for sport Chris Bryant said that he supports the possibility of fans and players being deprived of the opportunity of seeing England compete at the next two world cups.

All the commentary, sparked into life by allegations made the US police, conveniently sets aside the fact that there is an election tomorrow for FIFA president, it seeks to quash any note of the support Blatter has throughout south and central America, Asia and Africa, that is, most the world, it accepts the allegations made by an embittered egoist called Chuck Blazer via the FBI as statements of fact, and it fails to acknowledge that, with or without any inappropriate persuasion, Russia and Qatar would have won the votes to stage the world cups in 2018 and 2022 respectively.

The result of the election for the president of FIFA tomorrow is unlikely to be affected by the arrests and the associated melodramatic commentary.  FIFA delegates who intended to vote for Blatter will do so and those who favoured bin Husein will vote for him.  The film of black-clad agents with the letters FBI on their backs ransacking FIFA offices will have strengthened support for Blatter outside of the Euro/US-centric blinkered viewpoint.

Desperate calls for Blatter to resign, before or after being re-elected, from the European administrators is an admittance on their part that, despite their much greater football wealth, they cannot persuade most of the remainder of the world to vote how the Europeans would like.  And, as European history will attest, if a European administrator fails at persuasion then he resorts to bullying, bypassing democracy and whingeing.

It was hysterically absurd to hear the Tory prime minister and his minions bleat on about FIFA’s “corruption” a day after the Tory government spewed out a queen’s speech that ignored rampant tax-evasion and targeted the weakest and poorest as well as denying justice and rights.  Cameron asks Blatter to resign and step aside to allow a prince to assume command; Cameron, a cousin of the queen, will always favour royalty.

The activities described by the allegations against the FIFA executives are normal procedure.  If FIFA or any other sports administrative body doesn’t want to encourage a spot of bribery then why the hell have a bidding process?  Such a process requires persuasion by one talentless over-ambitious egotistical fool to another talentless over-ambitious egotistical fool.  It’s a silly game.  Chuck Blazer didn’t want to play anymore so he told tales.

Blatter, Platini, Dyke, Blazer and the rest of the international football administrators are hewn from the same template.  Nothing thrills them more than childish one-upmanship over another of their clan.  Again, this is normal behaviour for an international sports administrative body.

The most likely result of the general election will include

Post-election, a British government is formed by a grouping, or one or more parties, whose total seats in the house of commons is a majority, taking into account the the non-aligned speaker and deputy speakers’ seats and the abstentionism of any elected representatives.  (The elected Sinn Fein MPs normally choose to not take their sets in parliament.)  A minority government can be formed but without reliable support from other parties it would fail a confidence vote.

Given the likely election outcome described above, the government would consist of an alliance and/or coalition of parties led by Labour and including SNP, Liberal Democrats, Green Party and Plaid Cymru.  There is no constitutional and/or procedural reason why this cannot happen.

Right-wing intent to cheat the electorate

The Tories know that they will be unable to form a majority government with their disreputable friends in UKIP and the DUP.  But, they have planned to retain power with a minority government regardless of the wishes of the electorate .

In the closing days of the election campaign there has been a steady drip of deliberate misrepresentation of procedure of forming a government from various right-wing commentators, including references to off-the-record comments from senior Tories.  The intent of this drip-feed is to invent a spurious debate about the legitimacy of a Labour-led alliance if Labour is not the largest party and/or doesn’t have the highest number of voters.  As explained earlier, such a Labour-led alliance faces no procedural or constitutional obstacle to government and any attempt to deny this government from taking office would be illegal.

If the result of the election is as predicted then from Friday morning the ousted Tories and their partners-in-fraud in the right-wing media will launch a multi-pronged assault designed to prevent the public’s choice from forming a government and to retain the rejected Cameron as prime minister.  This assault will include blatant lies regarding procedure and false accusations about the legitimacy of a Labour-led alliance alongside made-up stories of unsolvable differences between the constituent parts of such an alliance and even random lies about irregularities at polling stations and at the counts.

Response to an attempted coup

Are Labour and SNP strong-willed enough to resist the Tory coup?  Or, would both parties prefer a second election after a Tory minority fails a confidence vote?

If the winners of the election are incapable or unwilling to fight without constraint against the coup then the voters who rejected the Tories and their unpleasant friends in DUP and UKIP must respond.  Cameron entering the house of commons alongside Farage, both happily assuming power without mandate, must not be allowed to happen.  It is undemocratic and there is no reason why the response to it should be democratic.

Tory election coup: It must be stopped.