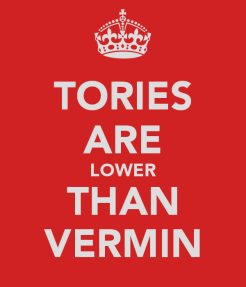 Spokespersons for wealth terrorists abhor being challenged.  They demand that the victims of exploitation stay obedient, keep quiet and eschew revolt.

The Tories are so fearful of verbal and written protest that they intend to restrict access to the right to vote and to the right to stand as a candidate in an election for anyone who doesn’t observe absolute civility toward Tories.  Minister for the Constitution Chloe Smith said “the measures being consulted on would protect voters, candidates and campaigners so they can make their choice at the ballot box or stand for public service without fear of being victims of misinformation or abuse.”  The Tories hope that the threat of removal of democratic rights will curb valid criticism of Tory policy.

A gagging law imposed on charities to prevent them exposing the effects of Tory policy has been expanded several times and there has been frequent use of non-disclosure agreements between the government and charities.

Alongside laws and gags, the Tories have tried to invent a narrative that they, and their collaborators, are under attack from rude and angry people.  This narrative was used, via the Bew Report, as false impetus for the aforementioned restrictions on democracy.

Age Of Incivility?
To try to perpetuate the invented narrative of unacceptable angry response to their attacks on humanity the Tories’ latest stunt was a team-up between the their Commission for Countering Extremism and right-wing think-tank Policy Exchange.

Policy Exchange concocted a report – An Age Of Uncivility – that used a ruse to justify the report’s necessity: “Recent years have seen a sustained and significant coarsening of the tone in British politics.”  That statement is, of course, nonsense; responses to Tory attacks have always included the widest breadth of use of the English language.  What is remarkable is how civil and restrained most people are when face-to-face, or in online discourse, with a Tory.

The report was peppered with screenshots of social media posts that the authors wished to criticise.  Stylistically, it was a horrible mess.

“Momentum, in particular, seems to provide a home to many who view politics in the most polarising and shrill terms.  Activists within that movement have been repeatedly accused of engaging in behavior that comes close, or crosses the line into, intimidation and abuse.  By some accounts, this even extends to other Momentum activists who differ in approach and outlook.  By contrast, the mainstream Conservative party has set its face firmly against such behaviour – and made a point of requiring local election candidates to sign up to a ‘respect pledge’ earlier this year.”

Note the use of the phrase “repeatedly accused” rather than “proven to be true.”

Earlier this year Tory chair Brandon Lewis, a brat with a persona akin to a petulant teenager, asked all politicians to adhere to a ‘Respect Pledge.’  However, an example of how much respect Lewis has for his political opponents occurred in July when he deliberately violated a parliamentary pairing arrangement with Lib Dem MP Jo Swinson who was on maternity leave.

The “Conservative party has set its face firmly against such behaviour” via, for example, the childish bullying behaviour of the Tory Bratboys whenever an opposition MP has spoken in parliament, particularly Jeremy Corbyn.

Throughout the report, random repetition of smears against left-wing politicians and activists sat beside pathetic complaints from the authors about critical observations of Tory policy.  An example of the latter was a complaint about the public reaction to the Grenfell Tower fire and to the removal of British citizenship of the Windrush generation.

“This inclination [to be aware of intent of Tory policy] was particularly evident in the wake of the Grenfell Disaster and, more recently, the scandal of the way in which the Windrush generation had been treated.  Both those episodes represented serious failings by the system – yet they were weaponised by sections of the left to impute morally repugnant motives to those on the right.”

Windrush was, and is, a deliberate policy created by the prime minister when she was Home Secretary that targetted people of Caribbean descent and was motivated by her ongoing intent to prove her racist credentials.  The Grenfell Tower fire was a direct consequence of policy decisions by the corrupt Tory Kensington council.  Both Grenfell and Windrush were examples of the intent of Tory policy in action.

The report objected to the fact that socialists are socialists.

“A section of the political left has made plain its hostility to ‘finance capitalism’, which it holds responsible for many of the ills of the current world. Against this backdrop, calls to direct action against corporations have been accompanied by fierce denunciations of ‘bankers’ and others associated with high finance.”

The observation above about attitudes to the intrinsically exploitative financial system showed that the clear purpose of the report was to encourage censorship of political opposition to that system.

The current Tory government, like any conservative government, is peopled with gimps of wealth terrorists and operates with acute relentless dishonesty by necessity.  To observe that fact was objectionable to the Policy Exchange report.

“A hallmark of the new politics of incivility is the assumption that the purported views of one’s political opponents are not legitimately held.  Instead, they stand condemned as being variously corrupt, venal, and even evil. Such an outlook often forms the flipside to a sense of selfrighteousness – and the belief that one’s own politics are inherently virtuous.  A classic example below conveys the message that the Conservatives are fundamentally malign in their politics.”

Even regarding the Tories, rightly, as “enemies” received a rebuke from the report.

“The most extreme manner in which some seek to delegitimise their opponents is by resorting to overt dehumanisation.  This tendency can be witnessed across the political spectrum – but seems especially prevalent among sections of the left for whom the ‘Tories’ are sub-human and, far from being rivals with whom one might debate, are enemies.”

Policy Exchange is in a duonanstic relationship with the Tories.  Every word of the former’s report was designed to protect the latter from inspection and analysis.  The report is not about incivility.  It is a demand for censorship of criticism.  It is a plea for the lies of the Tories to be left completely unchallenged.

To promote its report Policy Exchange had a launch at which a few right-of-centre politicians and hacks had a whingefest.  European Research Group member Jacob Rees-Mogg said “there’s a reason to be civil – it’s a way to win political arguments!  If people shout at you in a mask & we put our arguments calmly then we win – there is no rationality in abuse.  It’s not about limiting free speech but about defining responsible boundaries, eg threats of violence are never appropriate.”  Rees-Mogg has never uttered an honest word in his life and his approach to winning political arguments included hiring a thug who punched a woman at a speech given by Rees-Mogg.

Telegraph hack Sebastian Payne said “pretty much every time I go on TV I get messages saying I must the love child of Jacob Rees-Mogg  and Michael Gove. I can laugh a lot of that off – but some of it is nastier.”  The horror!

Remain Incivil!
The two most visible facets of Tory strategy are the intertwined policies of Social Murder and public infrastructure giveaways to privateer vultures.  Both facets are anti-humanity and anti-society and do not require civil debate in response.

Every Tory MP works against the majority of the British people.  They work for a small group of financial gangsters.  The venal, dishonest and destructive Tory government must be criticised continuously and robustly.

The wealth terrorists for whom the Tories work must be identified and eviscerated.

All are enemies.  Civility toward them is not just unnecessary, it is wrong.  Incivility is a necessity.